Just north of Old Hebron Ave, and off the Old Coop Rd, stands the remains of an 18th century house in the woods.

The house was once located on Coop Rd, but when Buckingham Reservoir was built, the road was cut-off midway through. Coop Rd was the rebuilt further up Hebron Ave, and Old Coop Rd became an access road to the reservoir.

The center chimney is still in decent shape considering the age of the house. The base still rises about five feet while half of the chimney still reaches 10 feet. Three sides of the foundation are still standing while the third has mostly collapsed. About 20 yards from the house is a stone post with notches cut in it. The stonewall that marked the boundaries of the yard can still be seen as well.

While the exact timeframe for the house is unknown, the center chimney dates it back to colonial times. It is unknown when the house was abandoned as well, however a map from 1934 shows it still standing. A separate map from 1874 notes the house is owned by an E.J. Goslee, one of seven Goslees living in the area of Old Hebron Avenue.

In a Sunday, April 17, 1955 advertisement in the Hartford Courant, the property is listed and it implies the house has been abandoned for a few years. The ad reads: 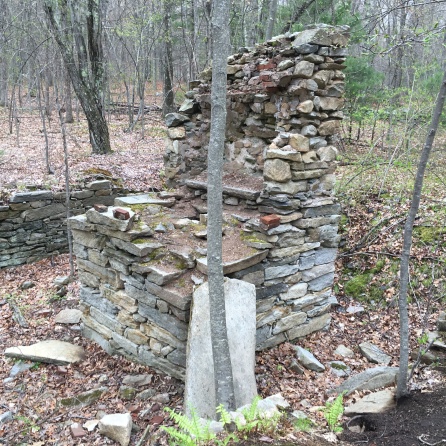 The remains of the chimney.