Before the days of automobiles that could easily transport students to a central school, one-room schoolhouses were used to educate kids within a reasonable distance of their homes. In Glastonbury, there were as many as 18 different school districts at one point.

Most of the old schools still exist. Some of the old one-room schoolhouses have been converted to private homes, such as District 3, Taylortown School, Wassuc School and Nayaug School. District 14 is a community club, District 18 is occupied by Glastonbury Youth and Family Services, District Four is used by the American Legion and Audubon Society while Eastbury School is a library. Not all remain though. Some have been demolished and are gone.

The original Buckingham School stood at least until 1934, when these aerial photos were taken. A photo of the school was taken in 1919, though with the new Buckingham School built in 1895 according to realtor websites, it’s not clear if the original was still an operational school. 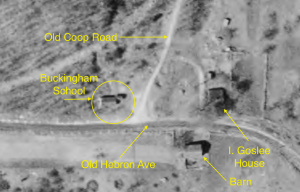 The school wasn’t built with a cellar hole foundation, so only a slight depression is seen from where it used to stand. There’s a line of brick where the western part of the building was and large slabs of stone on the opposite end were likely the steps up to the door. The building appears to have collapsed on itself as there are a lot of old nails in the ground.